Evictions & the right to housing

Explore the pillars of our research: 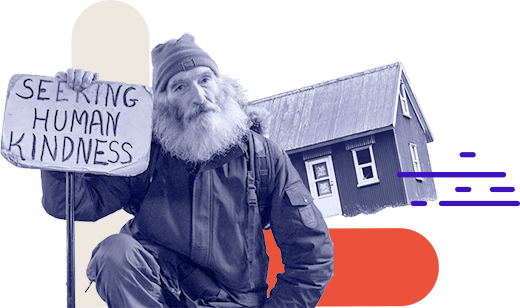 Evictions have a devastating impact on people’s wellbeing and society

What is an eviction?

An eviction is the involuntary loss of one’s home. We use a broad meaning of the concept of ‘home’.

A home can be formal housing or informal housing, and the type of tenure does not play a role in answering the question whether someone is evicted. As a result, someone can be evicted from, for example, a rental home, an owner-occupied home or a squatted building.

There are also many cases in which people (often vulnerable groups such as refugees, Roma or Travellers) are evicted from a piece of land that is not their own.

The EVICT project analyses all these types of evictions, and aims to see whether the international right to housing helps people that face an eviction.

How many evictions are there in the Europe and other parts of the world?

The exact number of evictions is unknown. In the Global South, evictions due to conflicts and urban development are omnipresent. In the Global North, evictions are on the rise due to social inequality, the financialisation and commodification of housing, as well as discrimination against minority groups and refugees.

In Europe, 700,000 people had to leave their home involuntarily within five years, and many more were at risk of losing their home. Spain faced, for example, over 500,000 repossessions during the financial crisis, because homeowners were unable to service their mortgage debts.

What does the right to housing mean?

The UN Special Rapporteur on adequate housing has characterised the right to housing as one of the most endangered rights. Still, the right has remained understudied and historically treated as a poor cousin to other human rights.

The nodes of this network are, primarily: the International Covenant on Economic, Social and Cultural Rights (ICESCR), the European Convention on Human Rights (ECHR), the European Social Charter (ESC), the Convention on the Rights of the Child (CRC), and the housing rights implied by European Union (consumer) law.

What does the EVICT project add to what we know about the right to housing?

The EVICT projects analyses the right to housing as a network of interrelated housing rights. Earlier research has primarily focused on one housing right and one sub-discipline of the law; as a result, similarities and differences between the various rights and areas of law have been understudied, leaving emerging and diverging trends unclear.

The EVICT project will scrutinise and compare data on the various elements of the network of international and European laws that constitute the right to housing. The project aims to explain if and why this right has any impact on national legal discourse and judicial decision-making in European jurisdictions. This will be achieved by collecting and analysing quantitative and qualitative data on eviction case law.

Explore the pillars of our research:

Having a place to call home is a fundamental human right, but every year hundred thousands of people are evicted from their home. They lose their home involuntary.

Publications on evictions and housing law