The Data Detectives: Examining the Impact of CESCR Case Law in a Housing Context

One of the main goals of the EVICT project is to determine to what extent the international right to housing prevents evictions. To this end, the various documents and decisions produced by the Committee on Economic, Social and Cultural Rights (hereinafter: the Committee) and relating to Article 11(1) of the International Covenant on Economic, Social and Cultural Rights (ICESCR) are currently being collected, systemised and analysed. By creating such a database, we aim to provide a comprehensive overview of the Committee’s approach to the right to housing as well as the State Parties’ policy on housing and their relevant social support systems.

Article 11 ICESCR recognises, among others, the human right to adequate housing. The main task of the Committee – a body of eighteen independent experts – is to monitor the implementation of the ICESCR and to ensure that the right to housing is respected, protected and fulfilled by the State Parties. It does this by engaging in a dialogue with the State Parties, as well as by delivering quasi-judicial decisions on complaints brought before it by groups or individuals. Understanding the Committee’s decisions is important in this endeavor, as it is one of the main international mechanisms by which an individual may seek redress against eviction. As such, it’s decisions are partially indicative of the strength of the international right to housing.

In analysing the complaints brought before the Committee, we assessed not only the decision the Committee ultimately reached but also examined whether children were involved as well as considering the extent to which additional treaties (other than the ICESCR) or the Committee’s earlier case law were cited in the explanation of their decision. Following our analysis of the Committee’s case law on the right to housing, we turned our attention to the State Parties’ reports submitted to the Committee by Spain, the Netherlands and the United Kingdom. A State Party’s report is an assessment made by a State Party on the implementation of the various ICESCR rights within its domestic systems, intended to guide the Committee in its work. In order to ensure verifiable data, we drafted a codebook to guide our reading of the State Parties reports. When writing the codebook, we aimed to define the variables as precisely as possible while at the same time ensuring we would capture all information related to the right to housing in the different states parties. Given that this database is one of the foundational elements of the EVICT project, we wanted to ensure we included all possibly relevant information for researchers later on in the process to access. For example, our variables included an assessment of the extent to which, if at all, the State Parties’ reports discussed the right to property in relation to the right to housing. Housing and property were given broad definitions to ensure that all the relevant information would be noted, but a limitation was placed on property insofar as that it had to be immovable property. In this way, superfluous information would be avoided.

Concerning the Committee’s case law on housing, we found that all 26 complaints had been directed against Spain. This might be explained by the fact that Spain is one of the few countries which has ratified the Optional Protocol to the International Covenant on Economic, Social and Cultural Rights, allowing the use of an individual complaint procedure for (groups of) citizens. Furthermore, we observed that violations of Article 11(1) were found only in 11.5% of all cases (as depicted in Figure 1), while the majority of the Committee cases were either discontinued or deemed inadmissible.This means that in a significant number of cases the housing issues were resolved by the state before the end of the proceedings, the applicants could not be reached anymore (and, thus, the cases were consequently discontinued), or the applications failed to meet the admissibility requirements. 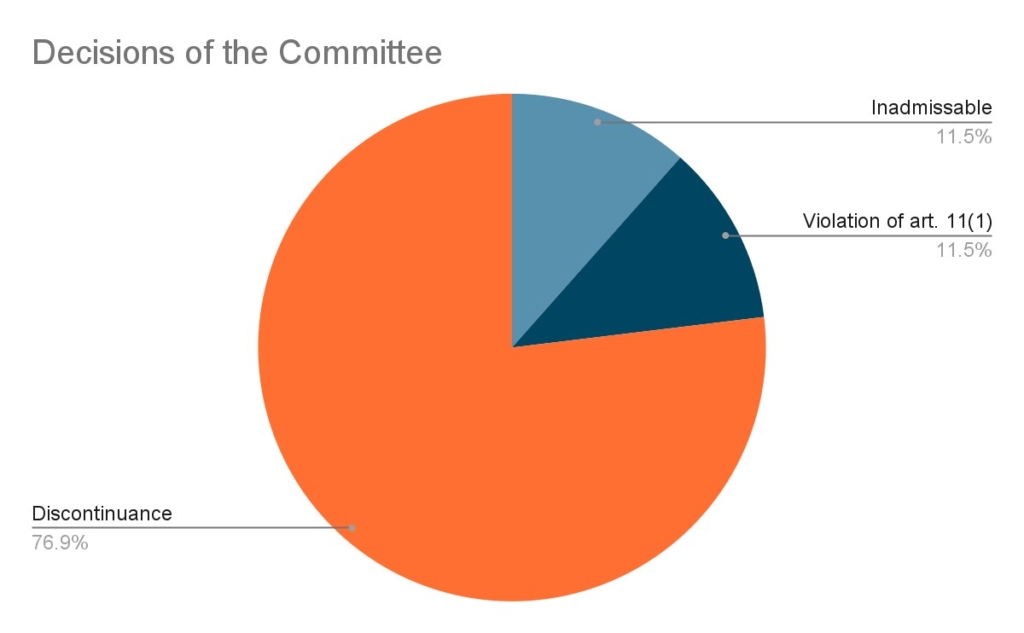 Figure 1: Decisions of the Committee

With regard to the State Parties reports, we have noticed that they were submitted seemingly arbitrarily in most cases. According to Article 16 of the ICESCR, each State Party must submit a report within two years after having ratified the Covenant and every five years thereafter. However, none of the State Parties that we have analysed respected the aforementioned deadlines, causing reports to be submitted at widely varying dates, a fact which can be observed in the timeline presented below.

Nevertheless, we noticed that the latest State Parties’ reports contained a significant amount of information regarding (the right to) housing, evictions, and the predicament of various minorities with regard to housing. Some examples of such information found in the reports involve graphs and charts regarding the rates of homelessness and evictions, social programs, and the housing situation of underprivileged groups of citizens. Any information related to housing presented in the earliest State Parties reports was, however, quite scarce and succinct compared to the information found in the most recent reports. 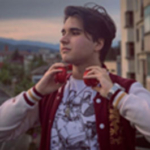 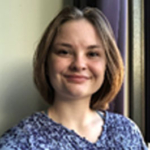